Curiosity and Understanding How Our Stories Evolved

For example, my friend grew up in poor neighborhood of NYC, where dangerous dogs occasionally roamed the streets chasing kids on bicycles. After being bitten several times, he was “permanently allergic to dogs and scared to death.” These experiences were his only ones with dogs. His story to himself was that dogs were bad, terrible, and dangerous. His story made perfect sense at that time in his life.

Curiosity, described as inquisitive and seeking a “state of not knowing” (Kashdan and Biswas-Diener, 2013), can be anxiety-producing. It can also be life-affirming. Anxiety, in the context of healthy curiosity can be an “optimal” state of being. Of course, too much anxiety isn’t good for anyone’s happiness, much less for their well-being. However, these authors make the point that curious people participate in activities that may cause them to feel uneasy. The same activities can also catalyze their personal growth by “…adventuring beyond the boundaries of [their] comfort zone.”

Curious people are also happy people, according to Kashdan and Biswas-Diener. A 2007 study (Kashdan and Steger) suggested that people who often feel curious seemed more satisfied. Truly happy people appeared to know that sustained happiness is not just a by-product of engaging in activities they like.

My friend held tenaciously to his “terrible dog” story until he was forced to begin to give it up and push the boundaries of his comfort zone. That happened when his 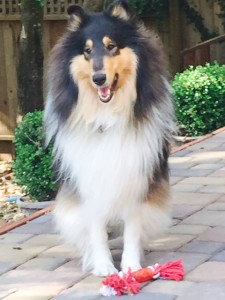 wife insisted that they get a dog. After all, she said, a collie had saved her life and was her constant companion during a difficult childhood. My friend is well-meaning but stubborn. On several occasions, he said to his wife, “Well, I love you, but it’s me or the dog.” Nonetheless, his wife insisted and, eventually, his curiosity led the way. The love relationship with his now-beloved collie tells the rest of the story. But, he says, he still gets a bit petrified when his dog, Farley, lets out a loving but terrifying bark.

As you can see, curiosity is also important as we focus on  “what” we’d like to see in our future evolved story. What are the stories you are telling yourself? And just what do you wish for in your future?

For thoughts on using your curiosity to understand how communication between men and women can affect the stories we tell ourselves, see psychology writer JB Allyn’s post, Women and Men: How Conversation Styles Can Affect Our Personal Stories.

Note: In this post, the author, Diane H. Engelman, is not directly or indirectly giving psychological or medical advice. Nor is she prescribing the use of any technique to treat medical, physical, or emotional problems. The author intends only to offer information of a general nature that may assist you in seeking personal growth. If you choose to use any of the information the author presents, she assumes no responsibility for your choices or actions.